A Northfield filmmaker exploring notions of home and belonging with community members through The Wandering House, a former ice fishing house retrofitted as a mobile audio recording studio, as an Artist in Residence Sept. 16 - October 7, 2019 and Feb. 1 - 8, 2020 at Lanesboro Arts.

If you live in Lanesboro, but your loved ones are hundreds of miles away, which place would you consider home? Is home necessarily tied to a physical place or is it an emotion, a state of being, an overall feeling of having arrived? What does it mean, and what does it take, to belong? What are the rights and responsibilities that come with being part of a community?

Northfield filmmaker Cecilia Cornejo is interested in exploring notions of home and belonging in collaboration with the Lanesboro community through The Wandering House, an ice-fishing house she retrofitted as a mobile audio-recording studio, as an artist in residence at Lanesboro Arts September 16 – October 7, 2019 and February 1 – 8, 2020. As an immigrant woman of color who has lived in the Midwest for the past twenty years, Cecilia invites community members to record their oral testimonies as they reflect on the significance of home, a concept that some of us may take for granted but is in flux for displaced communities around the globe. The Wandering House is designed to encourage curiosity and reflection, engaging participants in the production of collective knowledge and mutual understanding, while amplifying more nuanced narratives of rural life.

The Wandering House provides an opportunity for community members to speak candidly and privately about their understanding of home and the ties they have to Lanesboro. “The house is very much like a modern-day confessional,” explains Cecilia. “You go in alone. I plan to be outside the house to assist anyone who may have questions and to make sure the technology works seamlessly, but otherwise, it’s just you. I’m not asking participants to identify themselves by name, and if people prefer not to record their voice they have the option to complete a written questionnaire and leave it in the house’s mailbox. The questions are posted and shared ahead of time, so it’s not about catching you off guard or debating you—no. This is about creating a welcoming space for introspection and for re-learning how to listen.” She adds, “Similar to the act of ice fishing, The Wandering House searches for the bounty that lies below the surface.”

Participants may read the questionnaire here ahead of time in order to allow for some time to reflect. Ideally, participants will enter the house once they have engaged with these questions and are ready to record.

Cecilia’s work is known for placing community members at the center of the creative process, engaging them as active participants, co-creators of meaning, and architects of their representation. The Wandering House will be stationed at different places throughout Lanesboro, including downtown at Parkway Place, near Lanesboro Public Schools, outside Kenilworth Apartments and in front of the St. Mane Theatre. In conjunction with recording the oral testimonies of community members, Cecilia plans to capture the rhythms of Lanesboro in a series of long film takes and looks forward to the possibility of working with individuals willing to be filmed, inside or outside their own homes. Cecilia will hold a capstone event on February 7, 2020 where community members will have the opportunity to listen to and discuss the project’s findings and collectively decide how to best use and share the material.

Cecilia will share her project and discuss the themes it raises at SEMCAC Senior Dining and the classroom of art teacher Stena Lieb at Lanesboro Public Schools September 18-20. Cecilia will then bring The Wandering House directly to the Kenilworth Apartments and Lanesboro Public Schools September 24, 26, and 27 in order to have local seniors and students participate in the project.

The Wandering House launched in Northfield in July and August of 2019 and has received support from the National Association of Latino Arts and Culture and the Public Works Initiative/Mellon Grant at Carleton College. By exploring the meaning of home with the Lanesboro, Northfield and other Minnesota communities, Cecilia’s goal is to assemble an audio-visual quilt of rural and semirural Minnesota that can foster dialogue across language, class and culture.

“I have this very amusing, very inviting little house, where people can come and speak their minds and express themselves and not be judged,” she says. “Lanesboro interests me for its resilience and remarkable capacity to reinvent itself, and in so doing, defying these worn out yet persistent portrayals of Midwestern small towns.” 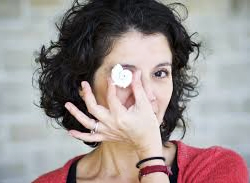 Cecilia Cornejo is a Chilean-born documentary filmmaker, artist, and teacher based in Northfield, Minnesota. She holds a Bachelor’s degree in Communications Studies from The University of Iowa and a Master of Fine Arts in Film, Video, and New Media from the School of the Art Institute of Chicago. With ties to both the American Midwest and the central coast of Chile, Cecilia’s work explores notions of displacement and belonging and is rooted in the experience of living in-between cultures. She uses a range of approaches and production methodologies—from the very personal and essayistic to the expansive and collaborative—to create works that move fluidly from the local to the global, and from the intimate to the openly political. Cecilia is invested in developing methods of collaboration with the people who take part in her work by transforming documentary subjects into active participants, co-creators of meaning, and architects of their representation. She teaches in the Cinema and Media Studies Department at Carleton College.