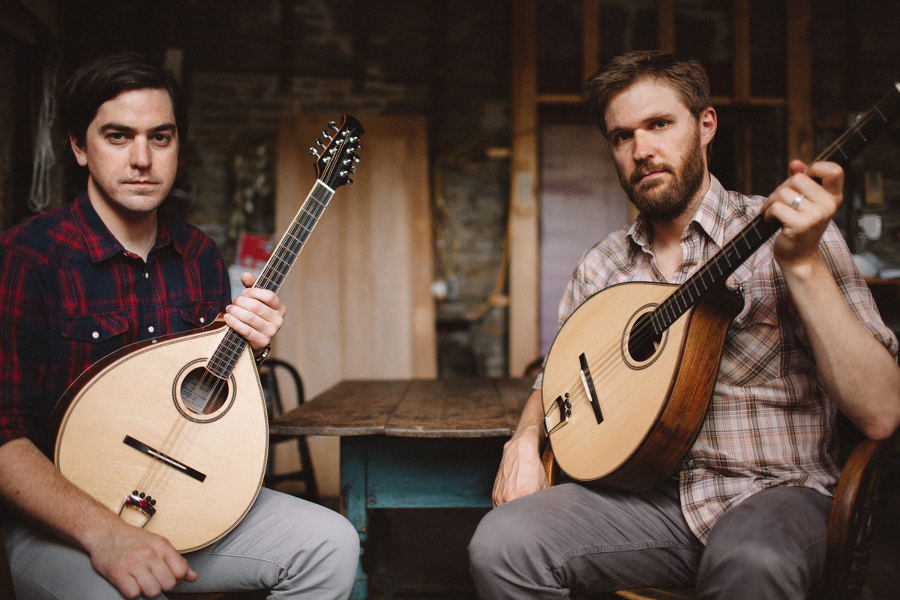 COVID-19 Update: This event will no longer happen in person at the St. Mane Theatre, due to the inability to properly social distance indoors. Instead, this event will be live streamed online!

Lanesboro Arts proudly presents The Lost Forty on Saturday, September 12th at 7:30 p.m. on Facebook Live. Tickets are not required for this event; however ticket donations of any amount are appreciated and can be purchased through the ticket link below. This concert will be available to all via Facebook Live on the Lanesboro Arts Facebook page (found here).  A native of the northern Minnesota town of Bemidji, Brian Miller teams up with Wisconsinite Randy Gosa as The Lost Forty. The Lost Forty revives and performs the Irish-influenced songs of men who roamed the Great Lakes region in the days when pine was king. Miller (Bua) and Gosa (Myserk) have toured the US with their Irish traditional music groups. Together they mix a passion for northwoods history and folklore with their love of arranging forgotten songs to bring to life this rich but under-explored music.

This special 60 minute online version of their show features 10 songs and lots of colorful history filmed at a variety or locations including a pre-Civil War saloon building, the northern Minnesota woods, an 1890s drover’s coach and the shores of Lake Michigan. In between the songs, Brian tells the fascinating stories of Irish immigrants and others who found work in the Great Lakes region and the important role that music played throughout the north woods. During the show, Brian will be available in the chat window to take questions about the songs and the history.

Brian Miller fell in love with Irish traditional music 25 years ago in the crowd at the Winnipeg Folk Festival, moved from his northern Minnesota hometown of Bemidji to St. Paul and has since become one of the most sought-after musicians in North America’s Irish music scene. Brian provides guitar and bouzouki accompaniment for the acclaimed band Bua.

Brian’s research and revival of Irish-influenced music collected in the Great Lakes region has earned four grants from the Minnesota State Arts Board. He was also a 2014 recipient of the Parsons Fund Award from the American Folklife Center at the Library of Congress. He promotes the revival of regional songs with The Lost Forty and through his blog Northwoods Songs where he sings, videotapes, transcribes and writes about rare traditional songs sung long ago in the white pine belt of North America. Brian has toured widely throughout the US and Canada with Bua, The Lost Forty and others. He teaches Irish (and north woods) music at the Center for Irish Music in St. Paul, Minnesota as well as at numerous camps around the US and Canada. He is the founder of the Traditional Singers Club of the Twin Cities.

Randy Gosa has been playing Irish music since 1999. During his undergraduate program at the University of Wisconsin-Milwaukee, he studied with several renowned Irish music masters including Liz Carroll and Sheila Shigley, studied at the University of Limerick, Ireland with Niall Keegan and Sandra Joyce, and completed the UW-Milwaukee Celtic Studies program. A founding member of the Milwaukee based celtic trio Cé, he performs nationally with the band Myserk and collaborates with several accomplished midwest-based musicians including flute player Brett Lipshutz and celtic harpist Kim Robertson. In addition to performing, he teaches at the Irish Fest School of Music and is an active céilí/set dance musician in Milwaukee. Randy’s versatile musicianship has been described by critics such as Alex Monaghan (Folk World) as “driving, percussive, lyrical, gentle, dominant by turns.”

This activity is made possible by the voters of Minnesota through a grant from the Minnesota State Arts Board, thanks to a legislative appropriation from the arts and cultural heritage fund.